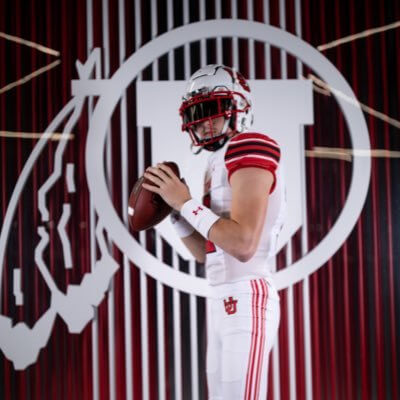 Mack Howard is the absolute truth at QB. This kid is awesome and is definitely ready to play at the next level. The four star QB will play his senior season at Oxford and 6A North better watch out. The 6’2″ 190lb QB threw for 3,475 passing yards had 47 passing touchdowns and 6 rushing TDs. He is committed to the University of Utah.

It doesn’t take long to be impressed with Mack’s highlights. This kid can really throw the ball. He stands tall in the pocket and delivers the ball on the money. When a receiver catches his passes they are ready to chunk the deuces and pick up some yards after the catch.

He has great mechanics as well. When you watch his film pay attention to how he works his feet. It’s just amazing to see kids doing all the fundamental things all the coaches over the years have taught them. You have to like great mechanics in a high school QB. Mack is a guy that won’t have to be taught very much as far as fundamentally. He has already committed to the University of Utah. “It feels great to be committed. I’m pumped to be a Ute,” said Mack Howard. “It really gave me a home feel and somewhere where I feel I can be successful.”

Mack has a great feel for the game as well. His movements in the pocket are very fluent. I don’t see many times where he looked out of place or confused. This may be cliche, but he doesn’t stare his receivers down. He reads all his keys and doesn’t mind dumping off to the check down. He doesn’t force bad throws and definitely doesn’t throw many interceptions. This kid is going to be very great this year. I’m anxious to see what kind of numbers he puts up on the MHSAA side of ball.

“Biggest thing I’m working on this off-season is my understanding of coverages,” said Mack. “I’m spending more time on that than anything. I know there is definitely a difference in 6A of the MHSSA side pertaining to the speed. This will definitely make me more prepared for the next level.”