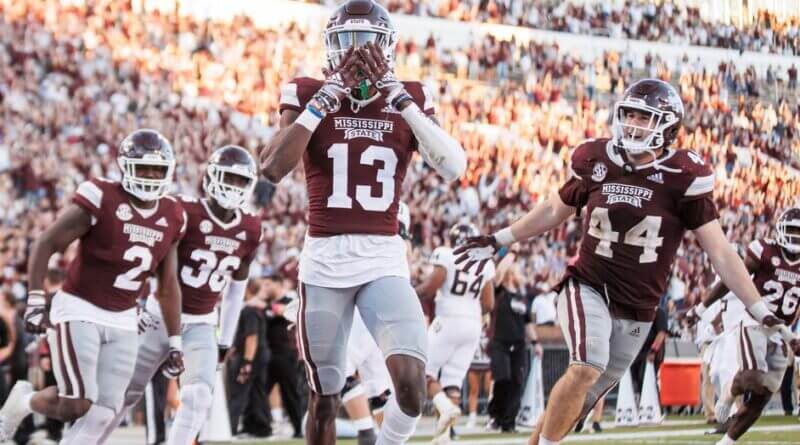 Forbes intercepted two passes in the fourth quarter Saturday, taking the second one back 33 yards for a touchdown to seal Mississippi State’s 42-24 win over No. 17 Texas A&M.

Forbes, a 6-0, 180-pound junior from Grenada is the FBS’ active leader in career interceptions returned for touchdowns. His 10th and 11th career picks – the 11 picks are the most in the FBS since 2020 – came on consecutive Texas A&M possessions in the middle of the final quarter right after the teams had traded touchdowns on four previous possessions. The pick-six was the Bulldogs’ final touchdown that provided a 42-17 lead.

This is the fourth time for a Mississippi State player to earn the weekly Bronko Nagurski award and the first since Montez Sweat earned it the week of Oct. 6, 2018. Chris White (2010) and Quinton Culberson (2006) are other past weekly winners.

It’s the second time in his career in which Forbes, a Freshman All-SEC selection in 2020, has intercepted multiple passes in a game and his pick-six against the Aggies broke the school’s career mark previously shared with Johnthan Banks, Corey Broomfield and Derek Pegues. As a team, the Bulldogs have 28 total interceptions in the 29 games under defensive coordinator Zach Arnett.

Forbes also blocked a Texas A&M field goal – the first block of his career – that created a 50-yard scoop-and-score touchdown and a 21-3 lead in the third quarter. He also broke up one pass and added one tackle in the game.

Mississippi State, off to its best start since going 5-0 in 2014, hosts Arkansas at 11 a.m. CT Saturday on the SEC Network. The Bulldogs moved into both national polls this week at No. 23.

Each week during the regular season, the FWAA has selected a Bronko Nagurski National Defensive Player of the Week since 2001. The FWAA and the Charlotte Touchdown Club will announce finalists for the 2022 Bronko Nagurski Trophy on Nov. 16. The national defensive player of the year will be chosen from those finalists who are part of the 2022 FWAA All-America Team and presented with the trophy at the Bronko Nagurski Awards Banquet on Dec. 5 at the Charlotte Convention Center. N.C. State head coach Dave Doeren will be the keynote speaker.

The FWAA has chosen a National Defensive Player of the Year since 1993. In 1995, the FWAA named the award in honor of the legendary two-way player from the University of Minnesota. Nagurski dominated college football then became a star for professional football’s Chicago Bears in the 1930s. Bronislaw “Bronko” Nagurski is a charter member of both the College Football and Pro Football Halls of Fame.

Founded in 1941, the Football Writers Association of America consists of journalists, broadcasters, publicists, photographers and key executives in all areas of college football. The FWAA works to govern media access and game day operations while presenting awards and honors, including an annual All-America team.