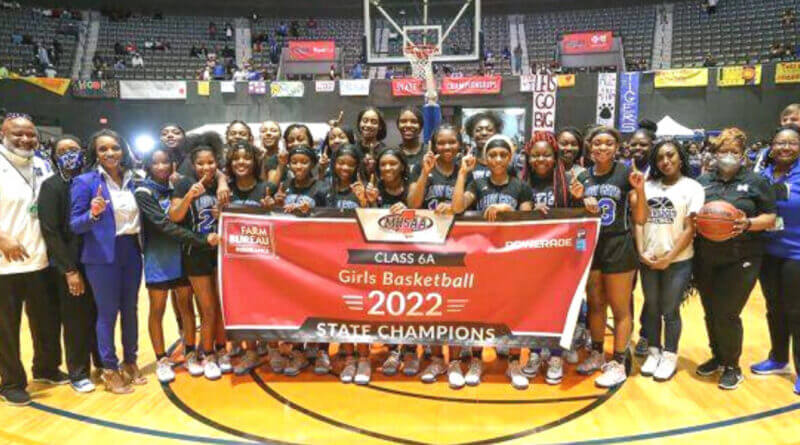 JACKSON — “It’s an amazing feeling because I know our girls worked for it and we deserved it!”

Debreasha Powe was very excited and out of breathe when we caught up with her after the game. She had 22 points and 10 rebounds in their championship victory over Harrison Central. It’s amazing to see how she takes over in the 4th quarter. She was also rewarded player of the game.

However this game was won with the collective effort of a great team.

With this being my first year covering high school basketball I am very elated to say I got to watch the Meridian Lady Cats play. These girls are undersized, but get after it on the court with hustle and toughness. They shoot the ball well, play great defense and rebound.

“We knew their was an height advantage this week. We knew we had to offset it and the only way to do that was through physicality and through speed and I think we did a great job with that,” said Coach Faulkner after the game.

Anybody who has ever played sports will tell you the game still has to be played. The front court for the Lady Wildcats was getting after it every play. The backcourt for them was holding down the paint and making sure they played great defense. They were being very physical and using their speed advantage to help them win the game.

At the half the score was 24-22 in the Queen City’s favor. Harrison Central wasn’t ranked number one in the state just because they look good on the court. These girls can play some ball and they wanted to get this victory. They were playing good defense as well but it is hard to stop Debreasha Powe when she gets on a roll.

With about 6:20 left in the game the score was 33-30 and Harrison Central had just scored and made it very interesting. Debreasha came down and hit a very hard contested layup to put her team up by 5. At that point she was starting to heat up and the Queen City fans were loving it.

“The community has really stepped up and they have rallied behind us, through thick and then. This is not the first year the community has gotten behind us. I was so glad we were able to pull it out for them.” Coach Faulkner spoke very highly of the Queen City community and fans.

They showed up in great numbers to support their Lady Wildcats Saturday night and they were loud the whole game. The Lady Cats would need that support as they were trying to close out the game.

“Box out and rattle them. That’s all we knew. If we box out, double the post and slow that PG down we’ll be good,” said Debreasha Powe speaking on their game plan for this past Saturday night. Again they executed it well.

The Lady Cats scored almost twenty points in the fourth while Harrison Central only scored ten. We have seen it time and time again. Powe takes over the first quarter and let’s you know she has no intentions on losing the game.

The Queen City fanbase was very excited and loud led by Mr. Wildcat himself. He was roaring and growling loud in the crowd, doing his dance while cheering on the Lady Cats. All of the Wildcat fans were standing around the sidelines ready to embrace their team. Coach Faulkner was sitting on the sidelines with her hands on her had as if she was in disbelief.

The Lady Cats had won their first title. The job was finished and the gold ball was headed back 20 east towards the Queen City.