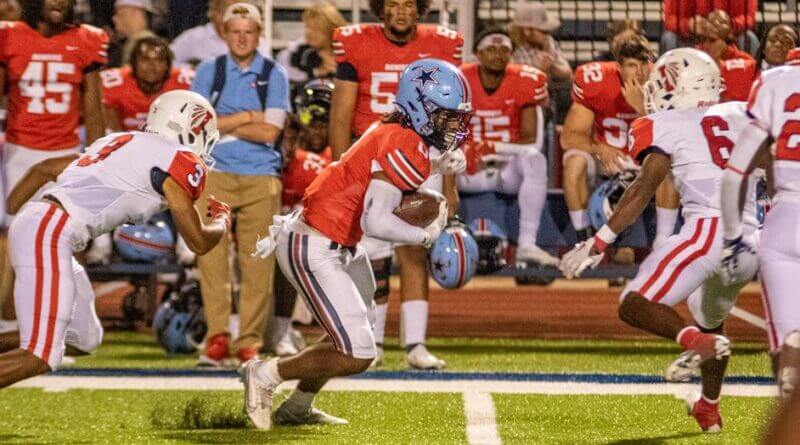 A shaky performance on behalf of Northwest was quickly overshadowed by a strong end to the second quarter and a dominant second half, as the fourth-ranked Rangers ran away for a 47-7 win against Mississippi Delta on Thursday evening.

Northwest led just 10-7 midway through the second quarter, before rattling off 37 unanswered points against the winless Trojans. The Rangers outscored Mississippi Delta 24-0 over the course of the second half, improving to 6-0 on the season, 2-0 in the MACCC North and winning its 17th game against MDCC in the last 18 meetings.

Northwest got to midfield on the opening drive of the contest, only for the Trojans’ defense to stall the drive and force a punt. After Mississippi Delta was also unable to get anything working on its first possession, the Rangers went 50 yards on four plays for the game’s first touchdown, a 25-yard pass from Ren Hefley to Jaycob Horn at the 9:29 mark.

After another empty possession from Mississippi Delta, Northwest worked through a short field but had to settle for a field goal attempt from Eli Hamlin. The sophomore from Terry delivered a successful 37-yarder, the longest field goal of his career, extending the Rangers’ lead to 10-0 with 6:29 left in the quarter.

However, both offenses had their fair share of struggles early. After another empty-handed possession from MDCC, Northwest also came away with nothing and the Rangers were forced to punt with 2:11 left in the quarter. That’s where a short punt from Shade Foster set the Trojans up with good field position, later scoring on the first play of the second quarter, as Caleb Parten’s 24-yard touchdown pass to Jordan Cavitt cut the Rangers’ lead to 10-7.

Two unsuccessful drives burned five minutes off the second quarter clock, but it wouldn’t take long for the Rangers to regain the momentum. Two quick completions from Hefley to Horn and Dekyren Johnson kickstarted a 10-play, 73-yard possession, ending with a nine-yard touchdown pass from Hefley to Horn with 6:26 to go.

As Mississippi Delta began to march toward midfield to open the third quarter, Byron “Tank” Pearson had other ideas in mind, intercepting Parten for a 51-yard pick-six. Hamlin followed with the PAT, sending the Rangers’ lead to an even further 30-7 gap.

Parten tried to give the Trojans an answer on the next possession, guiding his team across midfield. However, Northwest got the stop on fourth and one, forcing a turnover on downs from Mississippi Delta, ending the drive at the 38-yard line.

From there, Northwest essentially put the game away midway through the third quarter, as Hefley connected with Drea Shumaker on a 61-yard touchdown reception. The play, which was the longest career touchdown for the former defensive back, helped make it a 37-7 advantage.

Another three-and-out set the Rangers up at their own 23-yard line, but a solid 21-yard rush from Xavier Davis and a 37-yard touchdown pass from Hefley to D.T. Sheffield gave Northwest another score and a 44-7 lead, still midway through the third quarter.

Northwest continued to buckle down on defense and the Rangers kept moving the ball as the quarter drew to a close. Three plays into the fourth quarter, Hamlin connected on his second field goal from 24 yards out, stretching the lead to its final total.

Mississippi Delta would come up empty on its final possession of the game, allowing Northwest to burn off the final 6:41 of regulation with a nine-play drive that ended just shy of the Trojans’ red zone.

Northwest racked up 438 yards of total offense, while holding the Trojans to only 145. Most of the Rangers’ efforts came through the air, where Hefley finished with 289 of the team’s 320 passing yards. The Bryant, Ark. native and Presbyterian College transfer completed 21 of his 35 pass attempts for four touchdowns.

Hefley’s top target on the stat sheet was Horn, who collected 87 yards and two touchdowns on eight catches. However, it was Shumaker who came away with the leading performance, turning three catches into 100 yards and a touchdown. Sheffield also collected 84 yards on five catches, with his lone touchdown reception tying him for fourth in the Northwest record books for career receiving touchdowns (17).

There were no shortage of tackles spread out across the Rangers’ defense, as Jaylen Powell finished as the leader in the clubhouse with six total stops. Sam Brumfield, Fred Harris Jr., and Rontavious “Dude” Person collected five tackles apiece, while Pew, Khamron Ford, Quinzavious Warren and B.J. Washington all ended with four total tackles.

Foster’s four punts for 145 yards marked a new career-high for the Pearl native, while Hamlin matched his career-high of two field goals for the third time.

Parten finished 17-for-28 for Mississippi Delta, passing for one touchdown and an interception. The Trojans got 93 of their 145 total yards of offense through the air, with Cavitt and Reeheem Fairley combining for 50 yards on eight receptions.

With the win, Northwest runs its all-time series lead to 48-23-2 against the Trojans. The Rangers will now set their sights on next week’s road test at Coahoma (3-3, 1-2 MACCC North). The Tigers are a rapidly improving program that have been ranked twice in the last two years in the NJCAA polls. Additionally, CCC gave East Mississippi all it could handle on the road, falling 24-16 in Scooba on Oct. 6.