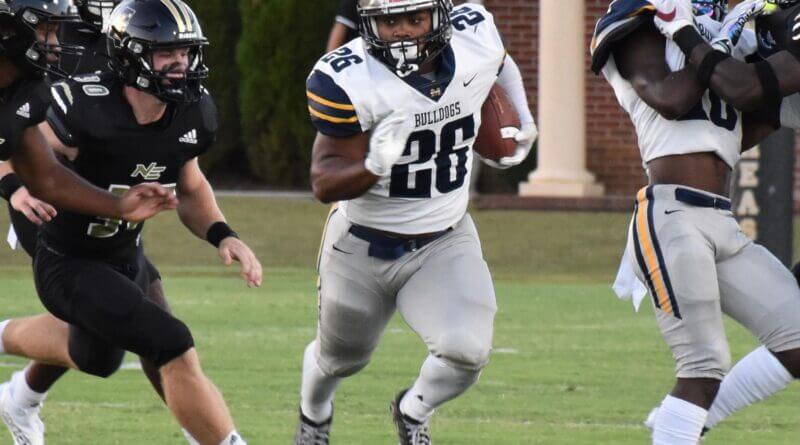 Wasson finished 3/4, including the go ahead field goal as the No. 6 Bulldogs escaped
with an 18-16 victory over the Northeast Mississippi Community College Tigers.

Both squads failed to get going offensively, but Cam Thomas led the Bulldogs with 94 yards on
19 carries. Xavier Evans provided the game’s only offensive touchdown for Gulf Coast while
also adding 55 yards on six touches. Defensively, Mike Smith led the Bulldogs with 10 tackles
including one for loss. As a unit, Gulf Coast started hot and snuffed out multiple touchdown
opportunities, ultimately giving them a chance to win late.

The first half was a tale of two quarters, with Gulf Coast taking advantage of numerous mistakes
early on. The Bulldogs took advantage of a short field after recovering a fumble on the Tiger 23-
yard line. Dylan Wasson drew first blood with a field goal from 40 yards out, giving MGCCC a 3-
0 lead with 11:22 left in the opening quarter.
On the ensuing kickoff, Northeast’s Khi Holiday fielded a kickoff drifting out of bounds and ran
out of bounds at the one yard line. In the shadow of the goal post, the Bulldogs blew up the
backfield for a safety, adding two more points to a 5-0 Gulf Coast lead just under five minutes
into the game.

Following three consecutive three and outs, Xavier Evans gave Gulf Coast the first and only
offensive touchdown of the night on the goal line. Following the PAT, Gulf Coast held a 12-0 lead
late in the first quarter. Defensively, the Bulldogs limited Northeast to just one first down in the
first 15 minutes of play.

The Tigers looked to take advantage of a interception by Jamarcus Smith to close out the first
quarter, but Gulf Coast held their ground for three consecutive plays, forced a third down
fumble, and recovered the football on in the shadow of their own goal post. However, Northeast
got their touchdown anyways a few plays later. Philip Short threw under pressure and threw it
right to Scott Norphlet, who took it into the end zone and cut Gulf Coast’s lead 12-7 with 10:46
left in the first half.

The Tigers carried that momentum into the next Bulldog drive by forcing a turnover on downs
nearing the red zone. Northeast proceeded to engineer their best drive of the half, but had to
settle for a short, 18-yard field goal by John Ellis Murrah. Gulf Coast’s lead was suddenly
trimmed down to 12-10, just over three minutes left until halftime.
Short would again make a mistake with his second interception to Tony Washington. Putt went
on to put Murrah in position for a second field goal attempt from 37 yards out. With three
timeouts left, MGCCC head coach Jack Wright iced Murrah three consecutive times.

Murrah delivered regardless to give Northeast a 13-12 lead going into the locker room.
After a few three-and-outs to start the third quarter, Murrah added three more points with 4:54
left in the third quarter following a Tony Washington fumble recovery. The NEMCC kicker continued his perfect night, extending Northeast’s lead 16-12. The Tigers continued their defensive pressure stemming from the second quarter to force a punt and give Murrah yet another chance for three.

Murrah’s perfect night would end with a 40 yarder that bounced off the right upright on the
first play of the fourth quarter.

Gulf Coast strung together a pair of nice in the minutes that followed, but had to rely on Wasson
to get three points once again. Wasson delivered from 35 yards out to trim Northeast’s lead to
just one, 16-15 with 8:23 left in the contest. Following a third down drop, it looked as if the
Bulldogs were going to drive down the field with a pair of first downs. However, penalties would
drive them backwards and force them to punt. With three timeouts in their back pocket, Gulf
Coast’s defense forced a three-and-out and then made the play of the night. A blocked punt
would give the Bulldogs prime field position on Northeast’s 13-yard line, under two minutes left
to play.

Jashon Baker followed that up with an interception to put the game on ice.

The Bulldogs return to Perkinston for their 2021 home and South Division opener next Thursday
as they take on Pearl River Community College. Meanwhile, Northeast will face Hinds
Community College in their third straight home contest this coming Thursday.