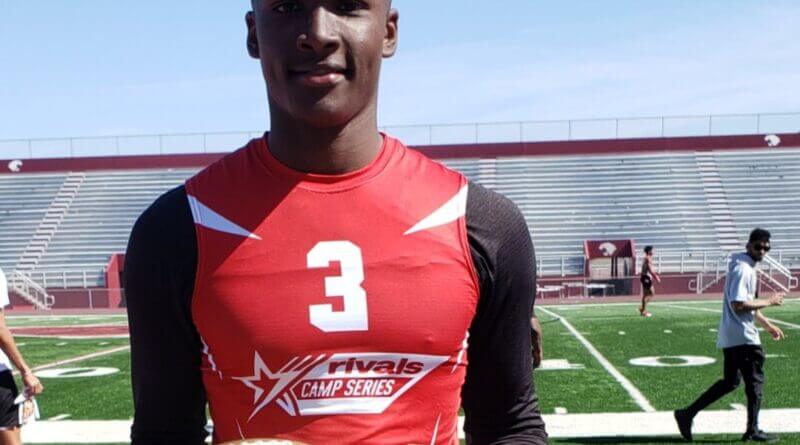 There were a few MS standouts at the Rival Camp this past weekend in New Orleans, LA. As a top football player it is an honor to attend this camp.

Next year is shaping up to be another great year for MS football. The classes of 2023 and 2024 are loaded. You have names like Dante Dowdell, Brayson Hubbard, Mike Williams, Trey Petty, Stonka Burnside, Eric Thomas Jr, Chris Davis Jr, Charleston French, Jalen Washington and more who will be stand out players next year.

We can all expect big numbers from these players next year. These guys across the state are working truly hard and I expect to see some phenomenal stats for the 22-23 season.

Stonka Burnside (Starkville High) a class of 2024 athlete was the MVP of the Rivals Camp this past weekend. The 6’1″ 180 pound WR/DB was labeled a 3 star athlete earlier this year and this kid can really play football. He is a ball hawk on both sides. Stonka is a great leader as well. He is already a two year letterman and is making some major noise during track season. He was very impressive at the camp over the weekend making a lot of spectacular catches and running good crisp routes.

“It was a good weekend and I enjoyed it. The drills we did I was already used to and I felt like I was already comfortable with. I did it with ease. It felt good to be MVP. Everything I worked for is all coming to hand and it’s just a blessing. I was excited to see some of my 7v7 players. When I seen them I knew I was in a comfortable space cause I felt comfortable around them. My experience for the camp was definitely worth the trip. It made feel good cause my mom felt good and she was proud of me!”

Stonka always has his mom around supporting him. Kids need that and he for one appreciates it.

Jalen Washington was in attendance this weekend as well. He is one of my favorite running backs in the state. The 2000 plus rushing sophomore reminds me of Jamal Lewis or a Nick Chubb. Hard nose, stocky runner that is elusive.

“Even though I only was at the camp for the first day I learned I need to improve my times. My speed needs to speak as much as my game on the field because not everyone watches my games. The second day I wasn’t invited, but I did get to watch some of my friends and other teammates compete and be some of the best out there by far! I learned more drills that will help me tremendously with my feet work and quickness. The most valuable thing I learned people will doubt you, but you got to stay focus and be you because nobody knows the work you put in,” said Jalen earlier referring to the Rivals Camp. I think Jalen is correct. He needs to work on becoming faster with his time. However his work ethic and game play is on point. He recently benched press 225lbs fifteen times.

Dante Dowdell and Chris Davis both attended the Rivals Camp this weekend as well. Dante was very competitive in the drills and you can tell he was going all out. He has also been showing good results in the passing game and keeping his speed down. Two things he told us earlier this year that he felt he needed to work on. Chris Davis Jr told us earlier that he enjoyed himself and was excited to meet new people. He was very good in the passing game as well. Something I’m sure we will see a lot of with Picayune having the two tough backs this year.

Charleston French (Amory) was in attendance as well. I think he came on the scene last season and showed everyone he is a force to be reckoned with.

“I felt like I had a very good combine and Camp. I had set a goal after my first Under Armour camp in Ohio to run a better 40 and I did. I ran a 4.6 Laser which is 4.5 hand held. I’m gonna keep working on that.  I’m running track this year and my trainer has been working with me on starts. So I’m gonna get that time down even more. I got selected to compete in the best on best camp day and I felt like I came to play. I like competing. It was good working with Jamal Lewis. I mean he has won a Super Bowl and had a good career running in the NFL. He led the league in rushing one year so it was good. He had a lot of advice and encouraged us when we did something good. I feel like right now I want to continue working on my blocking.  I want to get it better, and just constantly grind to get better every day!” French sounds very confident after his weekend in New Orleans.

Look to see a lot more players earning stars this year. I can’t wait to smell some BBQ and outdoors during the fall later this year. Football season is going to be off the chain!