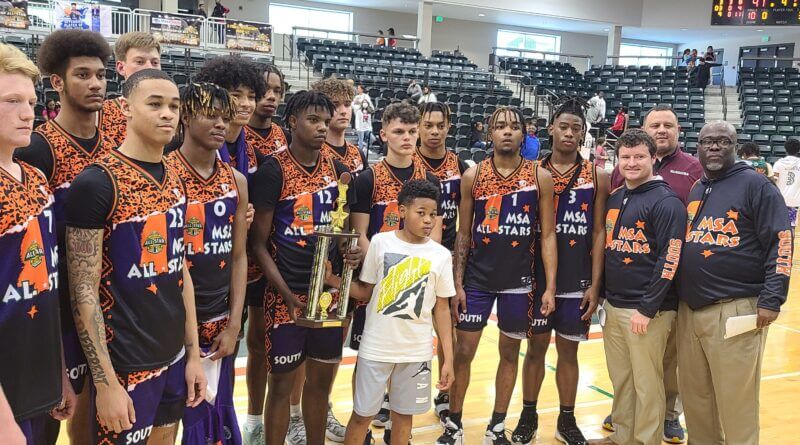 ITTA BENA — “This was a first class event,” said EV Geeker. An assistant coach for the women’s Miss Valley State University basketball team who was in attendance Sunday.

Both days were truly that. Very first class.

A great amount of basketball fans came from all areas of the state. There were recruiters from all over and the crowd was very diverse, from young to old.

“It was amazing to see so many people come out for the Saturday night events. To see them show up in numbers both days let’s us know we are on to something,” said Kiery Stribling Sunday morning before the girl’s and boy’s game.

Both nights there were fans sitting along the sidelines and all throughout the bleachers.

Saturday afternoon came it was time to play the games.

Both games came down to the wire. The final score for the girl’s game was 68-64.

Coach Jennie Vance and Luana Greer had been talking friendly smack all weekend and it was fun to see. At the scorers table before the game they both told the refs “I don’t like her” and the reactions on the refs face were priceless.

It was time for serious business and the game was underway.

At the end of the first quarter South was on top 16-14. Both teams were getting after it and you can tell they both wanted to win this game for their respective sides.

It was a fast paced game. Coach Vance was tough on her girls about rebounding and playing defense.

The second half of the girl’s game was back and forth for the remainder of the game. Zia Shields had two threes that lifted the South to a 39-36 lead with around seven minutes left in the 3rd quarter.

Towards the end of the 3rd quarter the North had regained the lead. They were up 47-43. They would end the quarter on top 51-47.

The South came out fast in the 4th. Within a minute they already had tied the game at 51. The South fans had some life and they were helping bring the girls back in it.

Zia Shields hit another three and the South was back on top 54-51.

The North wasn’t finished just yet. With 1:42 left in the game they were back on top 62-61. I just knew the trophy was going to stay in the Delta with Coach Greer. The South had scored again with a quick response by the North giving us a 64-63.

However the North just didn’t have enough to win. The South closed it out and got the victory.

Dacia Bostic was the overall MVP with 11 points and 8 rebounds. Katelyn Coleman had 14 points and was the North MVP. Zia Shields would tie for leading all scores as well with 14 points. She also had 5 rebounds.

The boys game was time to start and the gym was getting packed. It was time for the last game and last event of the weekend.

The first quarter was real close. It ended with a put back layup by TJ Blackmon (Grenada). The score was 28-27.

Mid way thru the 2nd quarter DJ Smith would tie the game with a nice mid range jumper. “It was a great experience playing all the guys from the South and meeting all my teammates from the North,” he said after the game.

He brought a great spirit to the event and was a general on the court yesterday.

The second half had started and with about 5 minutes left in the 3rd quarter the North would gain the lead for the first time 57-56.

Jabari Robinson (Raymond) and Calexis Campbell (Leake Central) were leading the way from the South. Campbell was off the chain and he was the overall MVP for the boys game with 20 points. They brought their team back to the lead and the score was 60-57 with 4:21 left in the 3rd quarter. At the end of the 3rd the score was 71-66 with the South holding on to the lead.

With 3:21 left in the game the score was tied at 84. I was excited to see that cause the South had a 10 point lead at one point in the second half.

It was ten seconds left and Briscoe would drive for a layup and missed. DJ Smith almost tipped it in, but the game would end 93-91 with the South winning.

“The administrative staff did a great job not only putting on the event, but making everyone feel welcome,” said Coach Tadlock (Raymond). It was exciting to see so many people satisfied with this event. Especially with it being an inaugural one. I can’t wait to attend again next year!