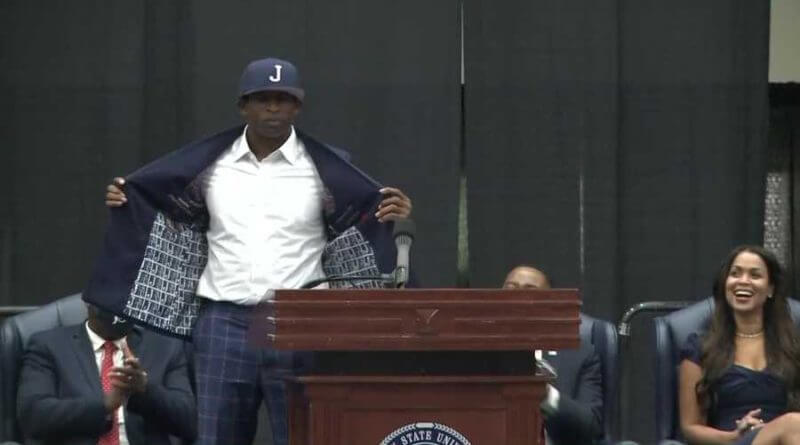 After numerous rumors that have floated around for the past week, Jackson State University has officially announced and introduced NFL Hall of Fame cornerback Deion Sanders as the new leader of the football program.

The announcement first came on the latest episode of Sanders’s podcast in which he announced that he had been hired.

He is the 21st head coach in school history.

“I am truly blessed to be the 21st Head football coach of Jackson State University,” said Sanders. “This amazing HBCU has always enjoyed a high level of commitment academically and athletically. It’s my desire to continue this storied tradition and history of JSU and prayerfully bring more national recognition to the athletes, the university, the Sonic Boom of the South, and HBCUs in general. I am TRULY proud to be a part of the JSU Tiger family. ‘I BELIEVE,'” said Sanders.

“I am thrilled to welcome Deion Sanders to Jackson State University, the City of Jackson, and Mississippi. Coach Sanders is student-athlete centered and cares about young men and their wellbeing beyond the football field. We expect to compete for and win championships at Jackson State, and Coach Sanders will help us achieve those goals.”

Sanders comes in after leading Trinity Christian School in Cedar Hill, Texas where he has lead his team as offensive coordinator to three consecutive Texas Association of Private and Parochial Schools (TAPPS) titles.