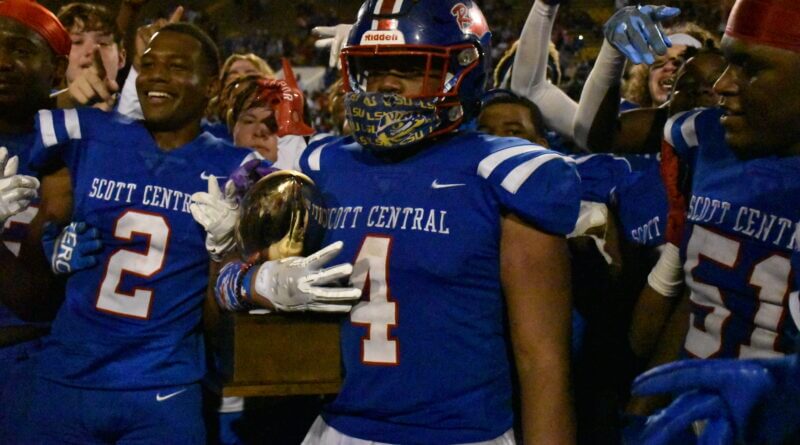 HATTIESBURG — The Scott Central Rebels left no doubt who the king of Class 2A was when it was all said and done. The Rebels used a 42-point run to blow past the Leflore County Tigers 72-24 in the MHSAA Class 2A State Championship at M.M. Roberts Stadium. The win ties the largest margin of victory in the MHSAA Football State Championship era and their 72 points broke the MHSAA record in head coach Jeff Stockstill’s first year with the program.

“This wasn’t a rebuild program,” Stockstill said. “These guys did a good job. It was my job to keep it between the lines. They bought what I was selling. All I did was make the practice schedule and get out of the way. God has been gracious to me.”

MVP Quez Goss accounted for eight total touchdowns, six scores through the air and two more on the ground. In total, he also finished with 453 yards of offense.

“(Quez) Goss has the will to win, being the son of a head coach,” Stockstill said. “He’s been doing this for a ling time. That’s a high pressure position. I’m hard on him. We expect performances like this.”

Javieon Butler and Dee Burks each had two scores through the air while Patrick Sessums and Antreyvious Edwards each had one as well. The Rebels outgained Leflore County 506-195.

Despite the dominance, Leflore County drew first blood. A shanked Scott Central punt gave the Tigers the ball on the Rebel 10-yard line. Dekari Johnson scored from eight-yards out and a two-point conversion made it 8-0 with 8:02 left in the opening quarter. Since then, things went downhill for Leflore County and it started on the next drive. Quez Goss threw a 48-yard touchdown pass to Butler to tie the game. Then, after a trick play to get into the Rebel red zone, Scott Central held defensively inside the 10-yard line.

After consecutive turnovers, Goss threw a second touchdown to Butler, who caught it over the top of a Tiger defender. The two-point conversion failed, but Scott Central had their first lead, 14-8 early in the second quarter. Gross later cashed in a Jahtavious Stack interception with a rushing score to go up 20-8 with 3:46 left in the first half. The Rebels weren’t done. Consecutive Leflore County punts led to two touchdown catches by Dee Burks, one of them came as the first half clock expired.

It got even worse for the Tigers as Antreyvious Edwards returned the second half kickoff 68 yards the other way for six, immediately giving the Rebels a commanding 42-8 lead. The Rebels wouldn’t be denied from that point on as Goss racked up a few more scores, Dekari Johnson added some of his own for Leflore County. The Rebels finish the 2021 season a perfect 15-0.