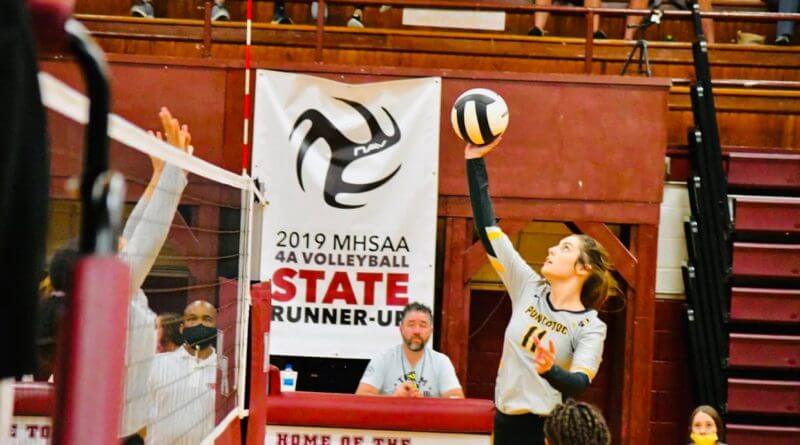 The Pontotoc Lady Warriors found themselves down in just about every way a team can be down in the game of volleyball.

An unenviable position compounded by being on the road against one of the Lady Warriors oldest and fiercest rivals. The team who elimated them from the 4A playoffs last season.

The Lady Warriors were down 0-1, 2-1 and faced an 8-2 deficit in the final set with New Albany rolling and the Lady Bulldogs home crowd rocking. Pontotoc was unfazed, relying on their stellar net play and strong defense to carry them forward.

Again and again, Pontotoc got the ball back when they needed it. The end result was a 3-2 win and a tough early season test passed.

“I know the size of the heart my team has and I never doubted them. I knew tonight would be a battle and I am so proud of the way the girls bounced back,” Head Coach Annie McGregor said of her teams come from behind victory. “It was good for us to test ourselves and what we can do,” she added.

New Albany took the first set 25-20 thanks to a solid serve game and strong defense at the nets.

Pontotoc and New Albany exchanged wins in the 2nd and 3rd sets in convinving fashion for each team, 25-14 and 25-17, respectively.

In the fourth frame with the Lady Warriors clinging to a lead, Junior Libero Caronline Howard got a mid-court push to end the set with a 25-22 win and force a 5th for the game.

Pontotoc continued to show their grit, with every player on the court and the bench imploring their team to fight back down 8-2. With the victory in hand, Coach McGregor was able to reflect on her teams desire to win.

“These girls are such a special group. They do a lot to make me proud on and off the court, but the way they stayed calm and battled back from being down 2-8 was incredible. It speaks volumes to their heart and integrity.”

A celebration ensued once the 15-13 victory was secured.

Pontotoc remains undefeated on the season at 3-0. The two teams square off against each other again September 8th.