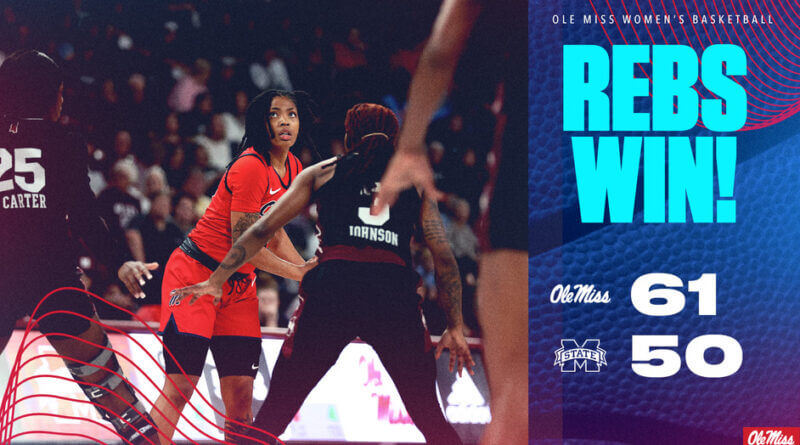 On the first day of 2023, Ole Miss women’s basketball brought in the new year in style by defeating its in-state rival Mississippi State, 61-50, at Humphrey Coliseum on Sunday night.

Angel Baker was the key Rebel to achieving Ole Miss’s (13-2, 2-0) second SEC victory. The senior dropped 22 points and 10 rebounds to give her second double-double of the season. This is Baker’s third time this season to earn 20-plus points, and her 10th this season in double-figures. Baker is now on a hot streak with three straight games dropping 10-plus points.

Overall, Ole Miss outscored Mississippi State (12-3, 1-1) in three out of four quarters. The Rebels held the Bulldogs to 34.5 percent from the field, MSU’s lowest field goal percentage of the season. The Rebels snagged a season-high of nine blocks to hold their opponent to 50 points and under for the seventh time this season. With the victory, Ole Miss achieved its first win in Starkville since 2007.

The Rebels came ready to roll against the Bulldogs in its 103rd meetup between the two teams. In true rivalry fashion, it was a back-and-forth game with five lead changes throughout the matchup.

Mississippi State took the lead early in the game with a 9-4 lead at the first media timeout. Ole Miss responded going on a 9-0 run. Snudda Collins drained a three to give Ole Miss its first lead of the game, but a Mississippi State basket from beyond the arch from Ahlana Smith would snap Ole Miss’ streak and take the lead back for State 15-11 at the end of the first quarter.

The second quarter brought another gritty battle between the two teams. The Bulldogs kept the lead for the entirety, however, the Rebels outscored Mississippi State 15-14. Elauna Eaton got the action going from behind the arch and brought the game back to a three-point deficit. Myah Taylor, the SEC active career leader in assists, dished out her 500th career assist to accomplish another milestone the grad transfer has marked off in Humphrey Coliseum.

Coming out of the half, Ole Miss held nothing back and got started quickly with a Taylor layup to put points on the board for the Rebels. Baker drained back-to-back threes that silenced the maroon and white crowd and tied the game to 37 all at the media timeout. Marquesha Davis picked up big minutes for Ole Miss in the third, going four-for-four from the free-throw line. At the buzzer, Baker put in a jumper to give Ole Miss the lead 47-44 heading into the final 10 minutes of the game. Out of Baker’s 22 points, 12 came from the third quarter.

In the final quarter, Ole Miss knew that it came down to big-time buckets and crucial stops to get the final say. Baker kept her hot streak going, putting in a jumper to bring her in the 20s on points. Scott caught a bucket in the paint that brought her to double-digits for the fifth game in a row and ninth this season. Rita Igbokwe brought down one of her season-high of four blocks in the final minute to keep Mississippi State scoreless in the final six minutes of the game. The Ole Miss defense held the Bulldogs to six points and a 16.7 field goal percentage in the fourth quarter to give the Rebels the 61-50 win over its in-state rival.

Up next for Ole Miss, the Rebels will return home to host Vanderbilt on January 5th. The game is set for a 6 p.m. tip and broadcast on SEC Network+.