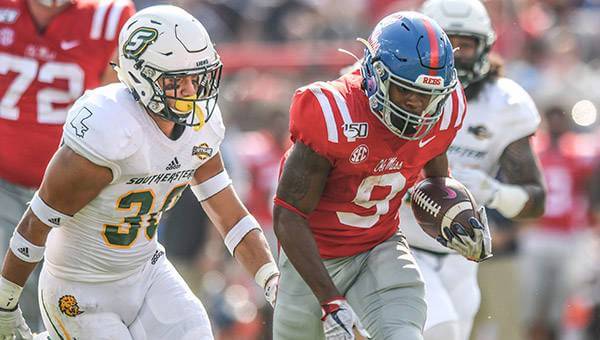 Coach Lane Kiffin knew he had plenty of young offensive talent to work with in year one. Along with many other pieces, he has top of the line talent at running back and wide receiver in Jerrion Ealy and Elijah Moore, respectively.

This morning, the exciting young duo found their names on the official watchlist for the highly distinguished Doak Walker and Biletnikoff Award, respectively.

Ealy, a sophomore, finds his way onto the watchlist for the award given to college football’s top running back after a stellar freshman campaign with the Rebels.

He carried the ball 104 times for 722 yards and 6.9 yards per carry. The dynamic back also added six touchdowns on the ground. He also found himself working in the slot often, where he caught twenty passes for 172 yards and one score.

Moore improved in his sophomore season in which he brought in 67 passes for 850 yards and six touchdowns. The junior will look to rebound, however, from a unsportsmanlike conduct penalty that cost the Rebels a chance at overtime in the Egg Bowl.