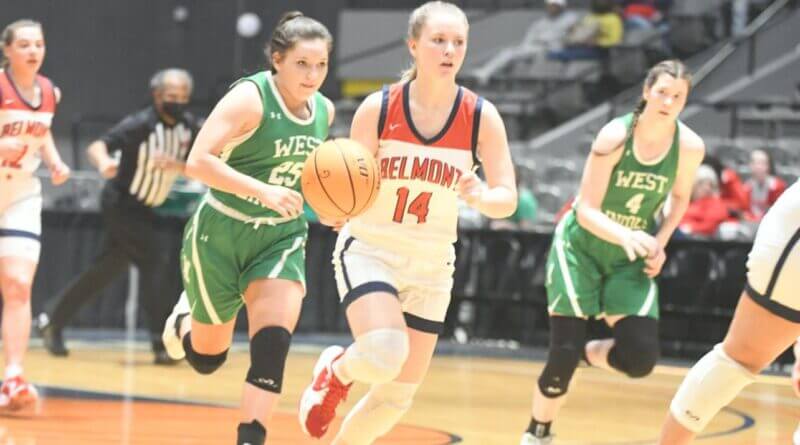 Belmont smothered the Lady Bears on the defensive end, basically putting the game away in the first few minutes. West Lincoln made just two field goals all day. They did manage 14 points at the free throw line. Belmont actually struggled on the offensive end, only shooting 22% for the game. They had open looks, but couldn’t get them to fall. Rayleigh Guin had 14 points, while Kat Reno grabbed 12 rebounds off the bench. Belmont will be challenged by an athletic, well coached team from Lake in the finals.

It was clear from the outset that it was going to be a real battle. Lake was hot from the three-point line in the first half. The biggest moment of the game came when New Site senior, Lily Whitley, fell to the ground on the defensive end, injuring her right knee.  She was ushered off the floor by trainers and would not return. To the credit of New Site, they continued to fight without their senior forward. Once Lake cooled off from deep in the second half, the Lady Royals came all the way back to tie the game. They expended so much energy coming back that they could not quite get over the hump. Lake made a few key plays in transition late in the game to close it out. Tra’Shaylah Wilson led Lake with 15 points. Freshman Chloe Chism had 17 points and 12 rebounds for New Site. Lake will now get a shot at Belmont.

The Pine Grove Panthers have been on a serious roll and the Heidelberg Oilers were not expected to be in Jackson. However, this game was a dogfight. It felt as if Pine Grove was in control but the Oilers continued to battle and made enough shots to keep it close. Jack Hudson scored 20 points, including six three-pointers. Jamas Cox made winning plays like taking charges, grabbing key rebounds, and flustering Heidelberg on the defensive end. Carson Rowland did not shoot the ball to his standard but he still controlled the game with ball handling and leadership. He had 18 points and eight rebounds. Reginald Jones led Heidelberg with 20 points. Pine Grove will face Velma Jackon with a state championship on the line.

This game was closer than the final score indicates. Neither team shot particularly well (a theme I’m noticing in almost every game in Jackson). Velma Jackson had a big advantage on the boards, out rebounding Choctaw County 46-33. They also had an eight point advantage at the free throw line. Those two factors allowed them to pull out the win. Devin Jones had 15 points, 11 rebounds, while Derick Bush scored 14.  Caleb Cunningham scored 16 points for Choctaw County and made his mark as a top young player in the state. Velma Jackson will see Pine Grove in the championship game.