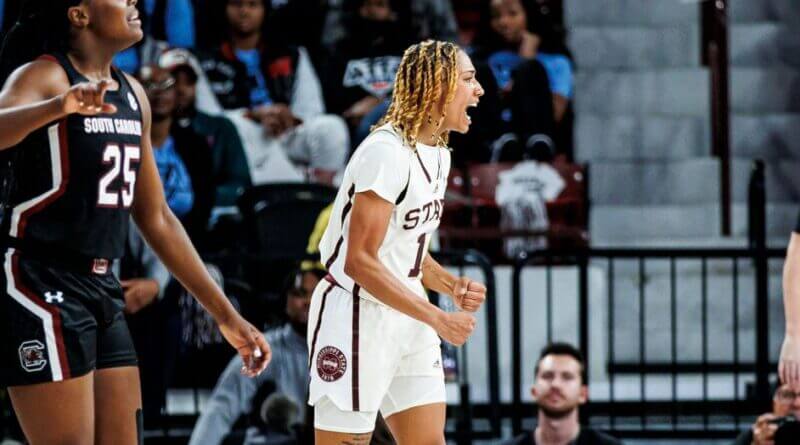 The Mississippi State Bulldogs move back in the win column with a 60-44 win over Texas A&M in Reed Arena on Sunday afternoon, improving to 13-5 overall and 2-3 in the SEC.

The Bulldogs had a dominant first quarter holding the Aggies to just six points, the second-fewest points (2 vs ULM 11/29/22) the Bulldogs have allowed in the first quarter this season. State fought hard, scoring 22 points in the paint against Texas A&M’s eight.

Ahlana Smith led the way for the Bulldogs scoring 18 points, seven rebounds and three assists. Smith has now scored in double figures six times this season. State’s first six points were all scored by Smith. Smith shot 73% (8-for-11) from the field, her second-highest field goal percentage since Nov. 9 vs. MVSU.

Jessika Carter scored 15 points and had seven rebounds against the Aggies leading to her sixth consecutive double-digit scoring game this season. Carter went 6-for-12 from the field and 3-for-4 from the free throw line. Anastasia Hayes led the team again in assists, dishing out five against Texas A&M.

Game Notes
• Bulldogs outscored the Aggies 22-8 in the paint
• State scored 17 points off of 19 Aggie turnovers
• MSU had eight steals in the contest, six of which came in the first quarter
• Mississippi State won the first quarter, 17-6. However, Texas A&M outscored MSU 28-27 in the second and third-quarters.
• Hayes tallied five assists on the night, she now has 95 on the season
• Jessika Carter picked up her 150th rebound of the season and her 48th blocked shot
• The Bulldogs shot 51% from the floor and held A&M to just 33% shooting

Up Next
The Bulldogs will be back home for a pair of games next week. On Thursday, Jan. 19, MSU will host Auburn at 7 p.m. before hosting Kentucky on Sunday, Jan. 22, at 12 p.m.

Fans are encouraged to WEAR WHITE vs. Auburn for a WHITE OUT game. We will honor the late Pat Summit on Sunday in our annual “We Back Pat” game.