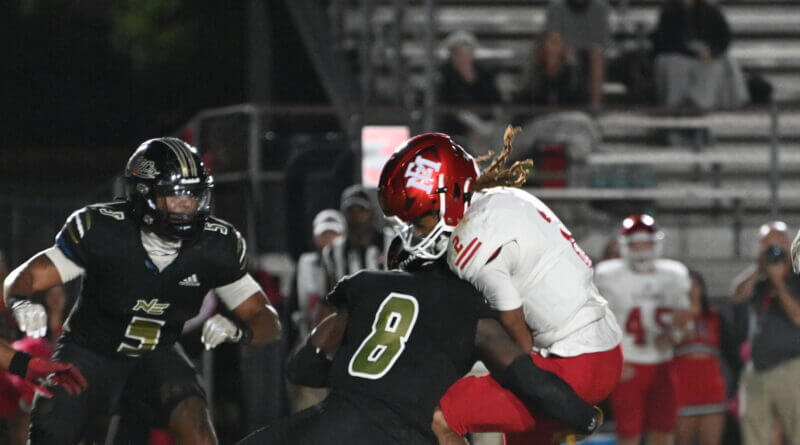 Another big week has resulted in a pair of nice rewards for Triston Newson of the Northeast Mississippi Community College football program.

Newson was recognized as the National Junior College Athletic Association (NJCAA) Division I Defensive Player of the Week for all games contested between October 20-22.

“I’m really excited for him and his future going forward,” said Tigers head coach Greg Davis. “He’s a guy that’s worked extremely hard to get where he is right now. The kid’s got a great mindset. This has been a business season for him.

“He came to me in the spring and said, ‘Coach, I’m going to have a breakout season,'” Davis said. “It has definitely panned out. He deserves every bit of it. He comes out here and competes every day.”

Newson was part of a Northeast defense that forced six turnovers against the Tigers. He lent a hand on half of the takeaways with two forced fumbles, a fumble recovery and an interception.

The Independence High School alumnus also recorded his eighth consecutive double-digit tackling performance. Newson is currently the leading tackler in the NJCAA with 94 total stops between solos and assists.

Newson’s first high impact play came late in the first quarter when his forced fumble on a punt return by Coahoma was recovered by Shaundell Carter. The visiting Tigers scored nine plays later on a fourth down run by Carter Putt.

He then stepped in front of a pass to end a drive by the homestanding Tigers inside Northeast territory. It the third interception of Newson’s final campaign in a black-and-gold uniform.

Newson later accounted for what turned out to be the winning points for the Tigers by falling on a fumbled snap in the end zone. It was his inaugural touchdown at the collegiate level.

“My first two years I didn’t get as much playing time, but the playing time that I did get I tried to take advantage of it,” Newson said. “It seems like everything is starting to pay off, but I’m still going to keep working. I’m not done yet.

“It’s fun playing with all the guys out there. We all just build off each other because iron sharpens iron. When the time comes, I’m ready to play ball. The biggest key is running to the ball and just playing physical.”

Newson is the third Northeast standout to receive NJCAA Player of the Week honors during the 2022 campaign. He joins fellow linebacker Kenny Byrd and kicker Guy Gillespie.

This is Newson’s second MACCC Player of the Week selection. He won alongside John Daniel Deaton, who secured special teams distinction after landing four out of five punts inside the 20-yard line versus Coahoma.