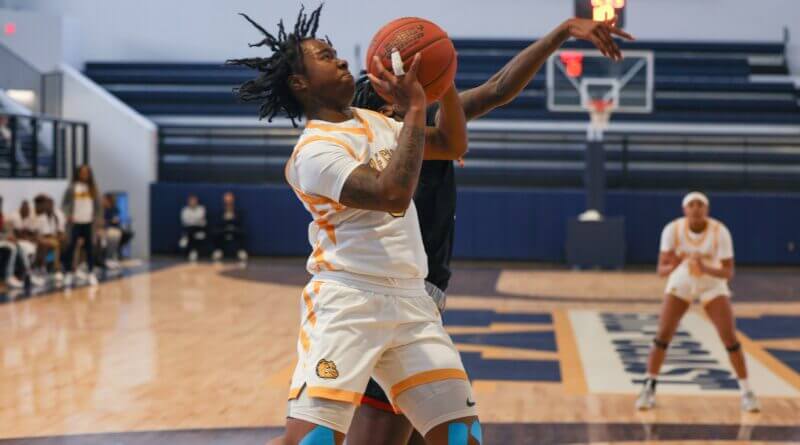 Nine different Bulldogs scored in Mississippi Gulf Coast’s 58-43 win Tuesday over Chattahoochee Valley to close out a successful Bulldog Thanksgiving Classic. It was a total team effort that saw only one player reach double-digits.

“I told them we never know whose night it’s going to be, but as long as we’re sharing the ball and moving it, that’s the kind of team we want to be,” Gulf Coast coach Hope Adams said. “I do feel like we’ve got to get better with our offensive execution. I think we’re a high-60s to low-70s type of team, but our young guards have to figure out the shot clock. We have to move the ball and know when to score.”

Gulf Coast (3-1) won its second game in as many days in new Dantzler Arena and will now have a week off to celebrate Thanksgiving. The Bulldogs play Pensacola State in Pekrinston on Tuesday, with tipoff set for 5:30 p.m. The game will be streamed at https://mgcccbulldogs.com/watch.

The Bulldogs handed the Pirates their first loss after five wins to open the season. Chatt Valley scored the first seven points of the game, and Gulf Coast went 4:48 before getting on the scoreboard. The Bulldogs ripped off 19-3 run to close the quarter to take charge and were never threatened.

“Hunt came off the bench and gave us some great minutes that first half,” said Adams.

Gulf Coast held CVCC to 21.9 percent shooting, and the Pirates made just 1-of-14 attempts from the 3-point arc. The Bulldogs bench outscored the Pirates bench 31-15.

“If I was grading us between 1 and 10, I’d give us about a seven, “Adams said. “We’re always striving for 10. The first half, we were great defensively and stuck to the game plan. We moved the ball and got the ball where we needed.”