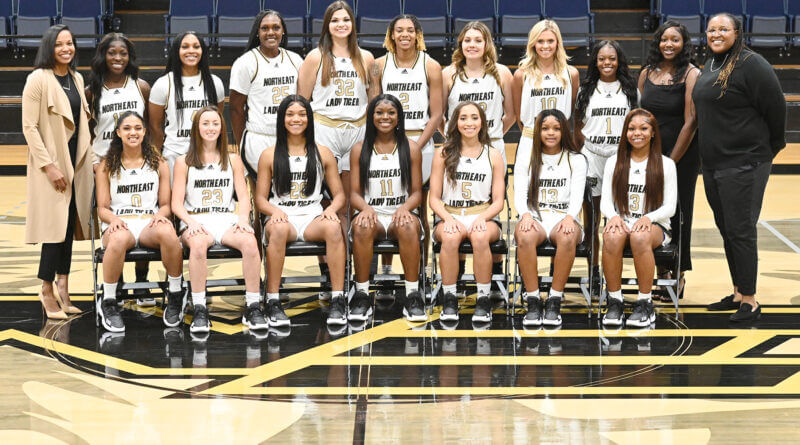 It starts at the top for the Lady Tigers with Chelsey Rhodes now directing the program as its head coach. Her former Delta State University teammate Aspriona Gilbert has joined the staff as an assistant as well.

“We’re so excited just to get it going,” said Rhodes. “I think this team meshes well together. One thing that’s really important is that they like each other. Chemistry goes a long way in basketball.”

Dorrough headlines that group as a reigning All-Mississippi Association of Community Colleges Conference (MACCC) selection. She came close to averaging a double-double with 15.1 points and 8.9 rebounds.

Dorrough scored in double figures during 15 of her 16 appearances as a freshman. She had six double-doubles, including a 14-point and 11-rebound effort against Pearl River Community College in the region playoffs.

The Calhoun City native tied a season-best with 25 points during back-to-back matchups against East Central Community College and Southern (La.) University at Shreveport in late February.

“Quay had a great year last year and she’s getting better,” Rhodes said. “She’s stepping up and making sure that everybody is working hard and holding each other accountable. That’s really, really big.”

Mask is turning into one of Northeast’s go-to leaders according to Rhodes. The Alcorn Central High School graduate started in all 23 games that she played in last year and had the second most assists on the team with 2.7 per game.

“She leads by example automatically, but now she’s starting to even speak up at times and I’m really enjoying that,” said Rhodes. “Defensively, offensively, whatever you ask of her she’ll be able to do it for you.”

Lindsey, who topped the Lady Tigers with 1.3 blocks and was second behind only Dorrough with 5.8 boards one season ago, and Watson are both Independence High School alumnae.

Hannah Campbell transferred to Northeast from Northwest Mississippi Community College. She was selected as the Most Valuable Player (MVP) for New Site High School in the 2021 Mississippi High School Activities Association (MHSAA) Class 2A championship game with 19 points in a winning effort.

Taitiana Beene brought another MVP award back to Prentiss County one year later. She scored 17 points and added four steals as Booneville High School captured the 2022 MHSAA Class 3A title inside the Mississippi Coliseum.   \

Another three-point threat that ended her prep career at “The Big House” is Madison Bennett. She had 26 points in Tishomingo County High School’s MHSAA Class 4A semifinal triumph over Pass Christian High School last winter.

The Lady Tigers signed four Capital Preps All-State selections in Byhalia’s Jasmine Malone, Madison Miller of Nettleton, Beene and Bennett. Malone and Miller were recognized as top 20 players to watch by Scorebook Live ahead of their respective senior campaigns.

Jerrilyn Richardson and Alexis Rowe are Northeast’s out-of-state representatives this year. Richardson of Memphis, Tenn., was a two-time All-Metro recipient from The Daily Memphian.

Rowe originally committed to Delta State. She was tabbed as one of the top seniors in her home state by Scorebook Live after helping Jacksonville (Ark.) High School reach the state quarterfinals.

JaKeria Hawkins joins the Lady Tigers after breaking the Lake Cormorant High School record for most points in a single game. She poured in 43 points last November against Lewisburg High School.

Rounding out the lineup for Northeast are local products Madison Gardner of Saltillo, Karizma Norphlet from Oxford and Ripley’s Amy Rodgers. Each of them qualified for the playoffs during their final high school seasons.

“I really can’t say anything bad about any of these kids because they’re on the daily making us so proud,” Rhodes said. “They understand that we want what’s best for them. We’re trying to get them prepared for what’s next and we want to win ball games.”

The Lady Tigers christen the new campaign by hosting Wallace State (Ala.) Community College at Hanceville on Tuesday, Nov. 1. Tipoff is scheduled for 6 p.m. inside historic Bonner Arnold Coliseum.