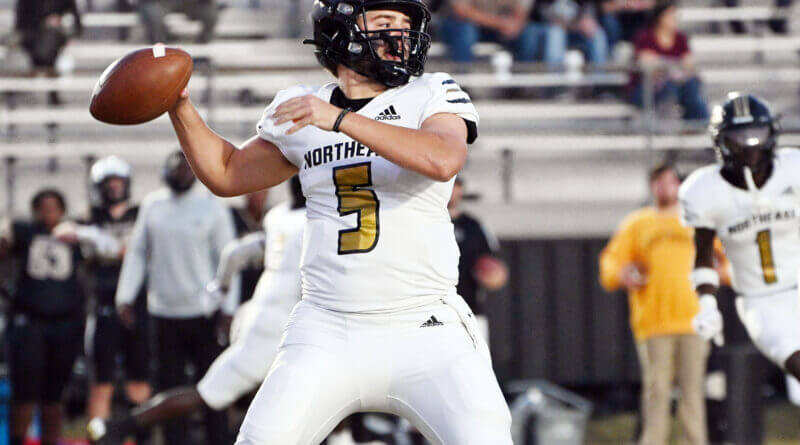 The last two weeks for Northeast Mississippi Community College quarterback Carter Putt have been nothing short of historic.

It began against the Bulldogs when Putt registered new career-highs by going 37 of 54 through the air for 369 yards. The pass completions and attempts figures broke the previous marks while the yardage was second most in a game at Northeast.

Putt easily surpassed the old records of 28 completions by Clint Wilson in 2009 and 47 attempts by Desmond Hunter, who ironically had his stellar performance versus Holmes as well some five years ago.

He only had one touchdown on that night at Madison Central High School’s Jaguar Stadium. It came on a four-yard toss to running back Tameron Patterson with less than 20 seconds remaining in the opening half.

However, Putt’s right arm accounted for 22 of the Tigers’ 31 total first downs. He averaged 6.8 yards per attempt while his 68.5 completion percentage was a personal best as well.

Putt’s excellence continued into Northeast’s non-division finale with the Warriors. He was 15 of 32 for 239 yards and also rushed six times for 18 yards to guide his team to victory inside Tiger Stadium.

His numbers were not quite as good as the prior week. But Putt did exceed 1,000 passing yards for his sophomore campaign on a 55-yard strike to KT Hicks early in the third quarter.

Putt became the first Tiger to throw for more than 1,000 yards in a season twice in their career. He also eclipsed Wilson to claim the title of Northeast’s all-time passing leader with 2,228 yards over 13 contests.

“I like to hear that, but honestly I really don’t care about records,” said Putt. “I just care about wins. Our play calling has been really, really good. The o-line has done a heck of a job both on pass protection and on run blocking.”

Putt has connected on 51.5 percent of his passes for 1,132 yards and seven scores so far during his final year in a black-and-gold uniform. That averages out to 188.7 yards per contest and 5.7 yards each attempt.

The graduate of Heritage Academy in Columbus has a season-long 60-yard pass to Kylan Garrett during the Tigers’ week two matchup with visiting Pearl River Community College.

“Carter keeps progressing and keeps getting better,” Northeast head coach Greg Davis said. “He’s so smart and intelligent so he knows where to go with the ball. I knew last year when he started having success that he was going to be special.

“I’m really proud of that young man because he earned his scholarship the right way. He’s been our starter all year and he’s going to continue in that role. He’s done a great job.”

The 5-11, 200-pounder is within reach of a handful of additional records with three regular season games left inside the Mississippi Association of Community Colleges Conference (MACCC) North Division.

That includes three single season marks held by Mason Cunningham. He had 160 completions, 280 attempts and 1,810 yards during the 2016 campaign before signing with Liberty (Va.) University.

“I couldn’t do this without my teammates,” said Putt. “I’ve got to thank them for everything they’ve done. I’m just trying to get it to the playmakers and let them do what they do.”

Putt made six starts for the Tigers as a second-year freshman in 2021. He racked up 1,096 passing yards, including a season-best 286 yards in a triumph over rival Itawamba Community College.