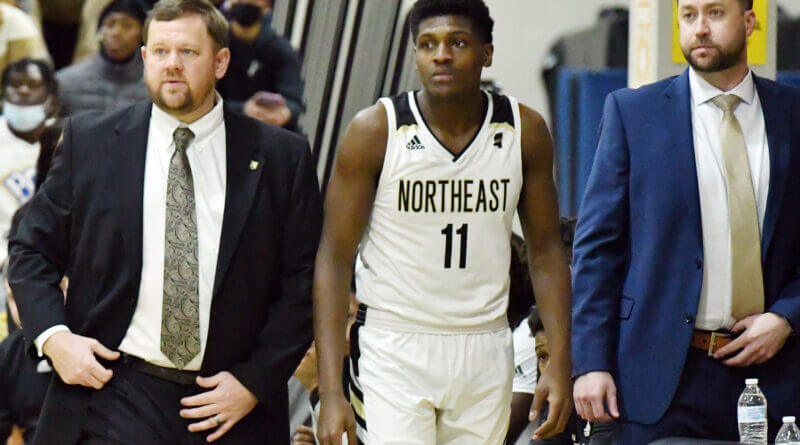 Photo: Cord Wright begins his 10th year as NEMCC’s headman with perhaps his most difficult slate yet. It includes tourneys in Indiana & Missouri. (NEMCC photo)

As the expectations around the Northeast Mississippi Community College men’s basketball program continue to rise, so too does the strength of its scheduling.

The Tigers’ 2022-23 slate features two marquee tournaments and seven games against opponents that were either ranked or receiving votes by the National Junior College Athletic Association (NJCAA) at some point last season.

“We’ve tried to enhance our schedule with some travel and good opponents,” said Northeast head coach Cord Wright. “I think we’ve been on the national level for the last couple of years and we want to continue to grow that.”

The Tigers will be well tested by the time conference play begins in the spring semester. Eight of Northeast’s first 10 games are away from the Booneville campus, including its season opener at Volunteer State (Tenn.) Community College on Saturday, November 5.

Northeast makes its debut on the Ricky G. Ford Court just two days later by welcoming East Central Community College. It is one of only four total home dates prior to the Christmas break.

The Tigers will square off against John A. Logan (Ill.) College, which rose to as high as No. 2 in the NJCAA poll one year ago, and host Vincennes (Ind.) University for the second consecutive campaign at the McDonald’s Classic from November 11-12.

This competition renews some long-standing history for Northeast. The Tigers and Three Rivers met annually from 1993-2004 while the last two matchups with the Golden Norsemen came at the NJCAA Division I National Tournament in Hutchinson, Kan., including the 1989 championship game.

“Those are games that prepare you for Hutch,” Wright said. “There are a lot of things at stake when you play in those types of events. Our league is starting to get a lot more recognition. I think in order for us to continue to be seen, we’ve gotta get out and play.”

Northeast wraps up its pre-holiday schedule with doubleheaders alongside the women’s team against visiting Volunteer State and Calhoun (Ala.) Community College on December 10th and 12th, respectively.

The mirror format inside the Mississippi Association of Community Colleges Conference (MACCC) continues for the third straight year. It cuts down on travel parties by sending either the Lady Tigers or Tigers on the road while the other team plays inside legendary Bonner Arnold Coliseum on the same night.

Hinds Community College comes to town for the inaugural league contest on Thursday, January 5. Northeast makes the return trip to East Central on Thursday, February 23 for its regular season finale.

The only game this year between rivals Northeast and Itawamba Community College takes place on Monday, January 9 in Fulton. The Tigers are also tasked with big contests at Jones College and Pearl River Community College in the month of February.

The NJCAA Region 23 Tournament begins at on-campus venues on Monday, February 27 and concludes with the semifinals and title matchups at Mississippi College’s A.E. Wood Coliseum.